The Lunigiana, on vacation between land and history! 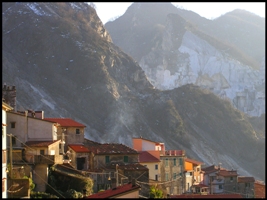 The Lunigiana includes the territory of the province of Massa Carrara, although once covered the Cinque Terre, Val di Pesa, the Gulf of Poets, the Val di Magra and the Alps.

The origin of the name is undoubtedly linked to the city of Luni, founded in 177 BC, and is one in the annals from the XIII century as Lunisanae Province.

Long dominated by the Romans after the fall of the 476, was the Lunigiana occupied by the Ostrogoths, the Byzantines, the Lombards and the Franks.
As a result of these domains, the family donated to the family adalberti Malaspina much of the territory, and it began a long government which also saw major territorial subdivisions as the two feuds of Mulazzo and Filattiera, which followed Fosdinovo, Dubois, and Pontremoli Massa

We must say that what the social, Economic and political typical medieval age in Lunigiana stopped only by the Napoleonic occupation.

During the Second World War the Lunigiana was crossed by the Gothic Line, (cut-off of the front which separated the territories occupied by Nazi than those already released by the Allies) and became one of the most important land of action for the partisans.

The importance that the Lunigiana was during the conflict the world's Liberation was Lotta witnessed by the fact that both the Province of La Spezia that the Massa-Carrara have been decorated for Gold Medal for Military Valor for the Resistance.

The wine of Lunigiana IGT got the "Val di Magra" on 9 October 1995. The history of this wine is recent and IGT is the knowledge of the quality achieved thanks to 'commitment of local winemakers. The IGT "Val di Magra" includes almost all the Lunigiana, from Pontremoli to Batesville.

The Via Francigena in Lunigiana ...

From step of the way Cisa Francigena down along the side of Tuscany. The first center you'll find is Pontremoli, the northern port of Lunigiana, characterized by a Historical separating the river from the Magra river Verde. Continuing along a narrow street, we head towards the castle Piagnaro which today houses the Museum of Stele. Interesting along the way francigena is also the maze of the twelfth century. sandstone which is located in the Church of St. Peter. To visit a Pontremoli is the Campanone, the square tower symbol of the city and the cathedral of Santa Maria Assunta that houses the wooden statue the Virgin and Child Enthroned, which in Middletown is revered as the Madona of the People. Once visited Pontremoli, the route continues to francigena Aulla.

Hiking route along 238.5 km route on horseback or mountain bike. The 14 stages have a length ranging between 11 and 20 Km and "stop points" are equipped for night.

Hiking route along 375 km, from Bocca Trabaria up to Liguria, where the pace of Two Saints, joins the high street of the Ligurian Mountains. It comprises 25 stages and was officially opened by Reinhold Messner.

In the plains of the Val di Magra you can do a number of hiking trails, for all those who love the fusion between the mountains and the sea. Not only natural routes but also the opportunity to go to the Via Francigena.