On holiday in Massa Carrra, after visiting museums and buildings of their city, tourists can engage in excursions outside the city, to discover the beauty that provide the framework to these places rich in history, art and magnificent landscapes.

Regional Park of the Apuan Alps 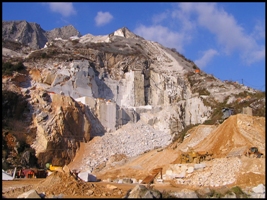 The park was founded in 1985 and is located close to the Alps, the mountain range that detaches dall'Appennino south of the Magra and down to the plain of Lucca. The more than 300 quarries in March mo in the area landscape design, which over the years has seen a reduced settlement by man.

A 'walk in the park will give you the opportunity to observe closely the various species fauna, including coral crab, which has become the symbol of the park, or even the rare species of eagles and peregrine falcons. The park also gives you the opportunity to discover the many species of plants and places you in close contact with nature that seems to have remained untouched by the passage of man.

Besides the natural aspects we propose to discover some of the small towns such as the Equi Terme, in the valley of Slide, famous for its curative waters, in caves where ancient artefacts were found dating back to the Stone Age. Here the tour to visit you to explore the canyon and a ARCHEOLOGICAL. Even Forno, a small village 8 km from Massa, is an interesting territory from a historical point of view, here were in fact variety of tools working on different hats and cotton. In spinning restored is the Visitor Center Park.

Tour of the Castles

More than 150 castles that tourists can find in the outskirts of Massa Carrara, most of which are perfectly preserved.

We offer an art-historical path of the most beautiful castles of the place, we still give a testimony of architectural styles and history of old families that have dominated in these beautiful lands.

The Castle of Malaspina Terrarossa is in a well-fortified palace and was one of the favorite residences of the most illustrious families of Malaspina. It was built so that you have total control over the viability of the valley.

Castle Malgrate has a tower about 30 meters high overlooking the valley of the river Bagnone. Next the castle lies the village of brick Filet.

Castle Bastia is built around a square structure with cylindrical towers really carattteristiche.

The Castle of Malaspina Lusuolo was rebuilt around the seventeenth century and then just left the original medieval structure. Large, the castle is located near other three, always belong Malaspina family.

The Castle Malaspina of Fosdinovo and is situated in the picturesque medieval village, just up the hill from which dominates the city. It is believed that one of the rooms of this castle has hosted Dante Alighieri.

Tourists on holiday in Massa Carrara to visit the archaeological center of Luni, a hamlet in the province of La Spezia, known for being an ancient and prosperous Roman colony.

The city name derives from its consecration to the Roman goddess Luna, a name of the goddess Diana Lucifer, while always the colony of Luni result of Lunigiana, the area between La Spezia and Massa Carrara, crossed the river Magra.

In 1964 the center was inaugurated archaeological Luni in order to collect All exhibits dating mainly to the Roman and Etruscan, which were found in excavations. The area is divided between the National Museum of the ancient city of Luni and the elliptical amphitheater. In the museum are carefully guarded archaeological artefacts (pottery, statues, household utensils ..), while in session Epigraphic are ancient illustrations for educational purposes.
In the archaeological area you can visit the Decumano Massimo, the House of Mosaics and the Forum devoted to legal aid and trade.

Hotels in Massa Carrara, Bed and Breakfast, Farmhouse for vacation